Creating a custom widget with multi-dimensional data from AIMMS

In the previous tutorial Adding dynamic contents, part II: Simple data from AIMMS we discussed how to create a widget that shows scalar data from AIMMS. In this tutorial we will explain how to create a widget that is populated with multi-dimensional data from AIMMS. To do so, we will first explain the concept of pivoting. Pivoting is essential in multi-dimensional widgets because it allows the user to specify how the widget should deal with the individual domain indices. After that, we explain the handling of the asynchronous data requests. As an example, we will build a simple table widget that will display data from a high dimensional identifier in AIMMS.

To make the most out of this tutorial, it is important that you meet a couple of prerequisites.

First of all, we are going to assume that you already familiarized yourself a bit with the AIMMS WebUI. Both with the end-usage and the app-development. That you have a recent AIMMS and that you have it running in your set-up.

Since this is a (software) development tutorial, we are also assuming that you have experience in writing software in a generic programming language, and, that you have a basic knowledge on HTML5 technologies (HTML5 DOM, CSS, Javascript, and the likes). It is also beneficial, however not required, if you are familiar with jQuery and, to lesser extent, jQuery UI, as AIMMS WebUI is built on top of these technologies.

More specifically, since we will be creating an HTML table widget, we assume that you are familiar with the basics to create an HTML table.

A pivot table usually consists of row, columns and data fields in which the user has freedom to position the labels in the rows or in the columns creating an overview that provides him the most insight. In addition, most pivot tables do support some kind of automatic aggregation of data. Although AWF does have support for automatic aggregation of values, this topic will <b>not</b> be discussed in this tutorial. This tutorial will focus on the freedom of the user to position the element labels where he wants to see them.

The following example further illustrates the concept of the pivoting. Consider the following 3-dimensional data that contains population numbers per sex, age group and year.

When positioning the age group and sex indices in the rows and the year index in the columns, the table will look like:

However, when positioning the sex and year indices in the rows and the age group index in the columns, the same data will now look like:

Also note that the order of the indices may influence the appearance of the table. For example, changing the order of the sex and year indices in the above table will yield the following table:

In the above example every one of the three indices needs to be assigned to either the rows or the columns. In case of a table, the rows and columns can be viewed as the parts. In a GanttChart, parts like resources (to specify the resource rows to be rendered) and jobs (to specify what indices to be used to color the bars) would probably make more sense.

Pivoting support has been implemented as a generic AWF option editor that is available for widget developers. Pivot support is automatically added to a widget whenever the pivotable contents property tag has been specified in the widget’s factory. The simple table widget that will be created later in this tutorial will illustrate this.

In addition to using the pivotable contents property tag,

Extending a widget with pivoting support

AWF has built-in pivoting support that can be added to a widget by adding the pivotable contents property to a widget. Doing so, the widget will be extended with a pivot option editor that helps the user specify the partition. 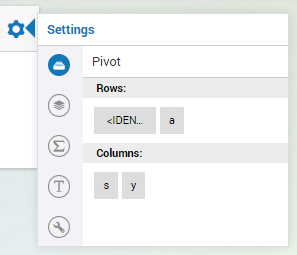 The pivot editor in figure 1 shows four indices. In addition to the domain indices of the identifier (which, in figure 1 are the a (age-groups), s (sex) and y (year) indices, the pivot option editor also shows the <IDENTIFIER-SET> index which allows the user to control the position of the identifier title in the widget. This index is always added by AWF and is specially useful in case the widget displays data of more than one identifier (with potential different index domains). In this tutorial we will only display a single identifier in a widget.

By selecting a single row in each part of the datasource, all indices will have a fixed value, which uniquely identifies a single value in the datasource.

The data that is associated with a datasource can be divided into two groups:

Whenever the option type of the contents has the JavaScript type property “datasource”, its resolved value will be an AWF datasource object. The AWF datasource object has a requestDataBlocks method that should be used to request data in an asynchronous manner. The 3rd arguments of this function is a callback function that will be called when the requested data is available. For example, consider a datasource with two parts named rowHeader and colHeader. To retrieve the data for both parts as well as for the resulting grid area, the following JavaScript statement can be used:

As mention in Writing your first custom widget you typically start with creating a widget factory. The widget factory for the simple table looks like:

When using the widget factory, AWF will contribute several option editor to the widget that help the user specifying the option values. In addition to the Miscellaneous option editor and the Advanced option editor that have been discussed in previous tutorials, the table widget in this tutorial will be extended with three more option editor:

To create the source file for the widget, you should create a JavaScript source file in the same folder as the factory file with the following structure

The individual methods in this file will be discussed in the remainder of this tutorial.

The above _create function creates an empty DOM container element, that is appended to the widget’s element that has already been created by AWF. The empty container object is used later on to fill it with addition DOM elements that will render the actual table widget. This cannot be accomplished during creation of the widget, because, at that time, the option values and data is not yet available. Using a humble _create that just creates an empty container element to be used later on, is a typical pattern that is often used when creating AWF widgets.

Content option changes are triggered by AWF whenever the user changes the specified value of the option at hand (e.g. by selecting an identifier using the option editor), and/or whenever the data of the underlying AIMMS identifier changes. Depending on the widget this may require a complete redraw of the widget.

Whenever the user empties the contents option, the widget will receive a resolved option change with value undefined. For this reason, you should make sure the refresh function will be able to deal with this situation.

In this tutorial, we will refresh the table by

The _refresh function below takes care of this.

The _createHtmlTable function below creates an empty HTML that gives the table the dimensions that are provided in the arguments. The function uses standard JavaScript and jQuery functions to create an HTML table. Every cell in the table will be decorated with some extra CSS classes to indicate the part (rowHeader, colHeader or values) and the position of the cell within the part (for example row3 and col2). These CSS classes can be used later on to style the table to your liking.

Filling the HTML table with data

Please keep in mind that the widget code as is presented in this tutorial will extend the widget area when the number of rows and/or column in the table gets too large. This can be resolved using the proper CSS classes or even better only determining the number of cells to be displayed based on the available width and height of the widget. Both approaches fall outside the scope of this tutorial

The main topics that were discussed in this tutorial were

Not what you where looking for? Search the docs

Remember we also have Community support

Still having trouble ? Reach out to us